On March 15th, 2021, the Stadtmuseum Berlin, together with the computer game publisher Paradox Interactive, launched the digital competition Global Build-Off: Berlin Edition with the hashtag #letsbuildberlin. Participants were asked to construct a new bridge between the divided inner city quarters of the Klosterviertel and northern Luisenstadt in a playful way. The international community of the computer game Cities: Skylines was called upon to design a new, contemporary Spree river crossing at the location of the former Waisenbrücke ("orphan bridge") and the area around the neighboring Märkisches Museum. Numerous creative and ambitious designs were submitted, the best of which made it onto the shortlist of the distinguished jury. The winners were awarded on May 14th, 2021, the symbolically chosen Brückentag ("bridge day") between the holiday and the weekend.

Bridges are among the most demanding structures that can be designed in the Cities: Skylines game. The competition's challenge to build a green, modern pedestrian bridge has kept game enthusiasts around the world busy for weeks. We are pleased about the great response and are enthusiastic about the creativity of the entries. The winning designs show that modern urban development is an interesting topic for everyone.

The winner of the Grand Prize for the Best New “Waisenbrücke” Bridge and Immediate Surroundings is Robert 'Essad' Widmark. He takes home 1,000€ and a Razer Huntsman V2 Analog Keyboard for his efforts! Now that the dust has settled, Jason 'AmiPolizeiFunk' Ditmars was pleased to sit down and interview this accomplished builder. 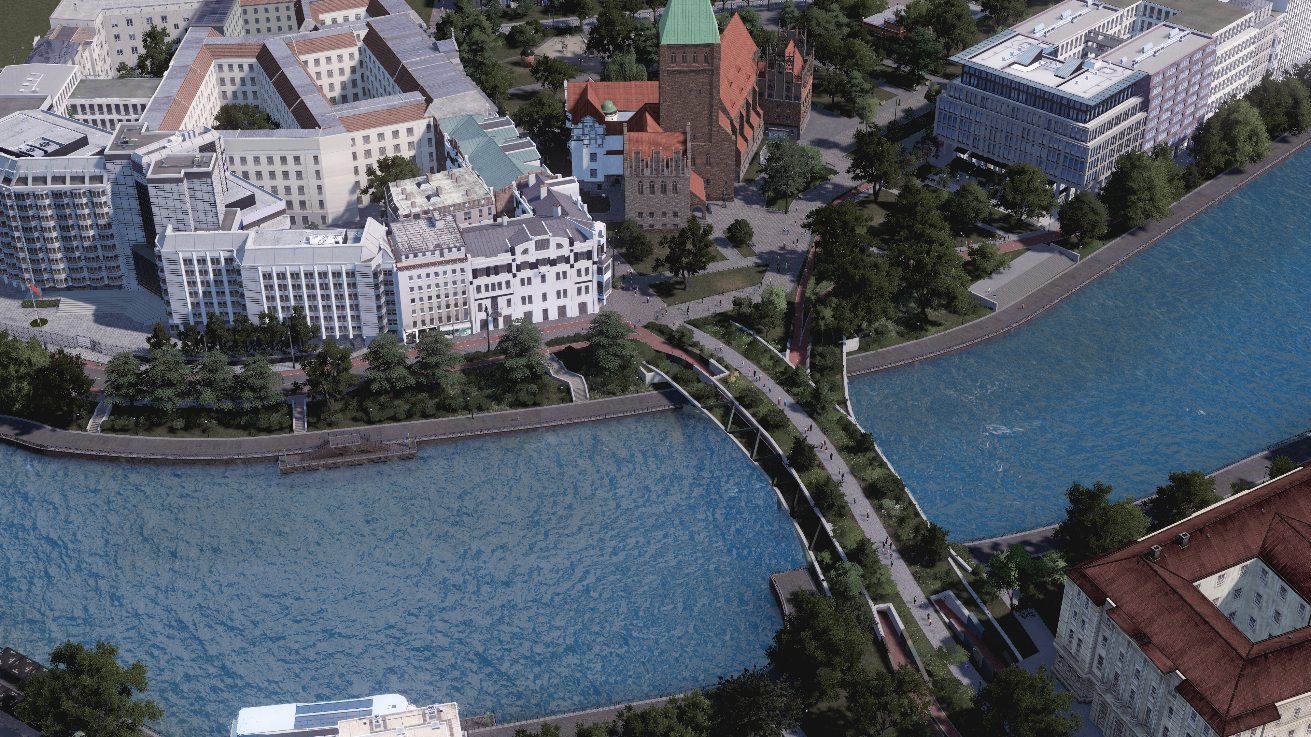 Hi Essad! Congratulations on winning the Cities: Skylines Global Build-Off Berlin Edition! Your build blew us away. Before we talk about the work, can you tell us a little bit about yourself? Where are you from and what do you like to do when you're not playing C:S?

Hi Jason! Thank you, and great job arranging this contest!

I’m living in Växjö, Sweden, in a house with my wife and son. I’m currently on parental leave, but otherwise I’m working as a music teacher. Music is of course also an interest outside of work and has been since I was 3 years old when I started playing drums. Since then I’ve learned other instruments and started producing music for the last 10 years. Some of that music can be heard in all my videos, including my global build-off contribution.

Other than music, I’ve also been doing sport climbing for a few years now, and absolutely love it. 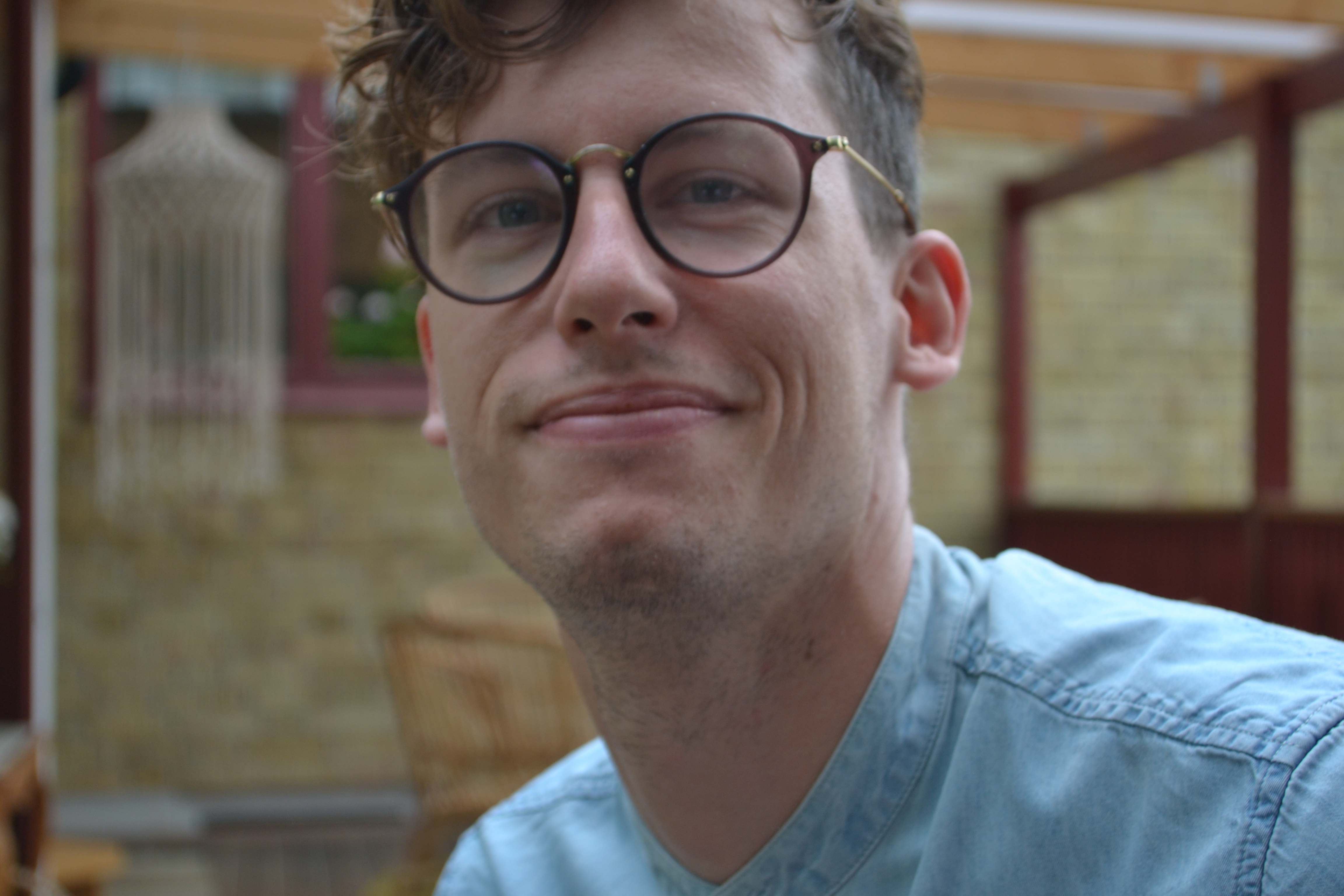 Your bridge has an interesting double-layer design. Can you tell us about your initial inspiration for this kind of bridge, and how you came up with your ideas for the build?

My initial inspiration for the bridge came from wildlife crossings. I felt the idea of nature continuing uninterrupted over the Spree fit my vision (heavily influenced by the 2030 Agenda) perfectly because expanding the parks on both sides was my most important requirement.  However, expanding the parks in the surrounding areas can’t (from my understanding) be done without massive changes that would probably be very expensive and take a lot of resources. So I thought - why not turn the bridge itself into a park instead? The idea of a double-layer design came later when I was about to add bike paths. From my experience of cycling in cities (including Berlin) I find shared pedestrian and bicycle paths to be very annoying. So to avoid that, the only possible solution I found was to create a double-layer bridge, separating pedestrians and cyclists entirely. I also made two separate bike lanes to ensure maximum traffic flow.

You used every trick in the book to create this build, from Procedural Objects Mod to extensive use of custom networks. How have you learned to build like that? Can you talk about the tech-within-the-tech, the toolbox that you needed to use to make your vision a reality in the game?

My interest in making detailed builds in Cities: Skylines started with watching the work by Strictoaster, Freshpopcorn and Fluxtrance on youtube. After that it kind of escalated when I discovered the usefulness of Google Earth and the mod Procedural Objects. Procedural Objects (PO) is a mod that I’ve used since it’s very early days, before it turned into the user-friendly cad-program-within-a-game-mod that it is today! During these years I’ve come up with quite a few techniques that I’ve used extensively in my main C:S project Sarougal. These techniques came in very handy when starting this competition, as the toolbox was already there and because of that I didn't need to spend time figuring out what was possible to do and how.

One of these techniques is basically about choosing particular elements of buildings or props and turning them into new buildings/props by combining them together. To achieve that I simply use PO mod to hide the parts of the buildings/props that I don’t want, leaving only the useful elements visible. The goal here is to create unique buildings without having to create a new asset in asset editor (or asking creators all the time to do that for me). For example, in my Berlin build I recreated the Märkisches Museum from scratch by using a window from a cathedral asset and a stone wall from a church asset. Every other part of the original assets are invisible. To make the walls and roof of the museum I used a few different textures on basic procedural objects that I combined, like a Lego build, into the shape of the museum.

Procedural objects are also very handy in making networks in the game look realistic, as you can load your own textures on the objects. It’s especially useful when using invisible networks, which I tend to do a lot. Invisible networks let me create complex crossings or roads as I need without having to worry about the mess it would look like if I had used visible roads. When the functionality is in place I can start building the visual part of the road on top of the invisible one by combining basic procedural surfaces (with my own textures) and ploppable pavement/asphalt. 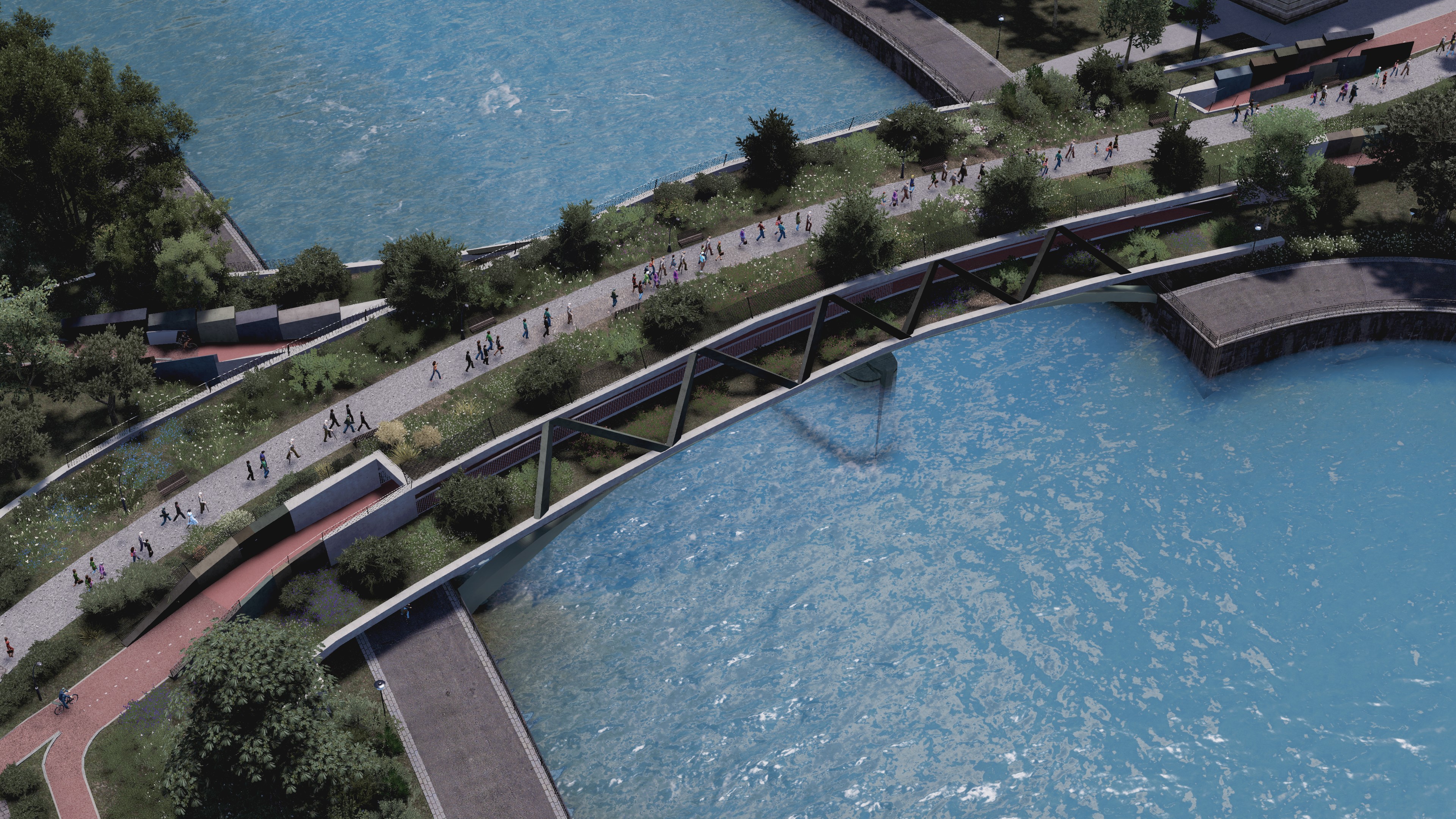 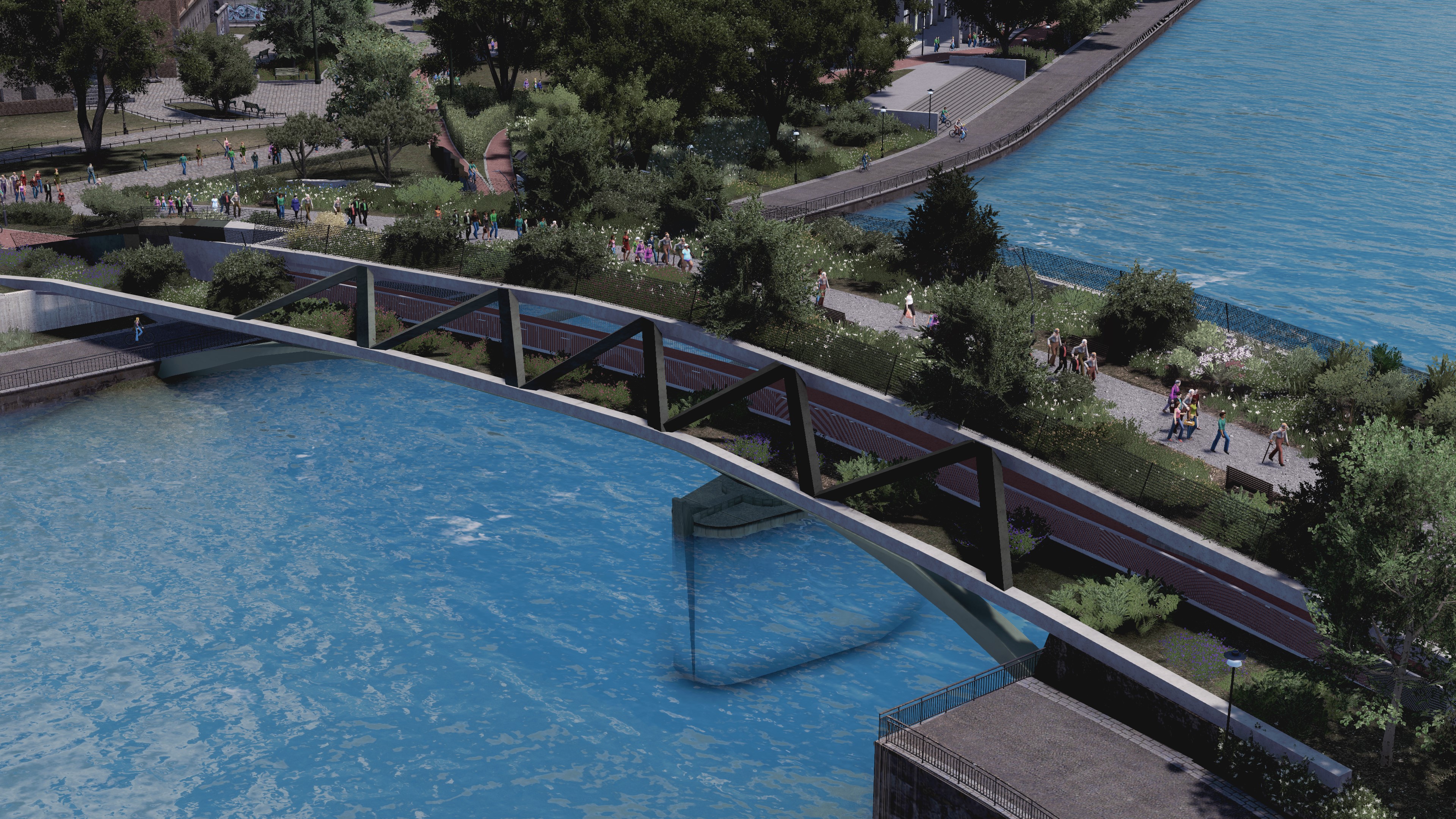 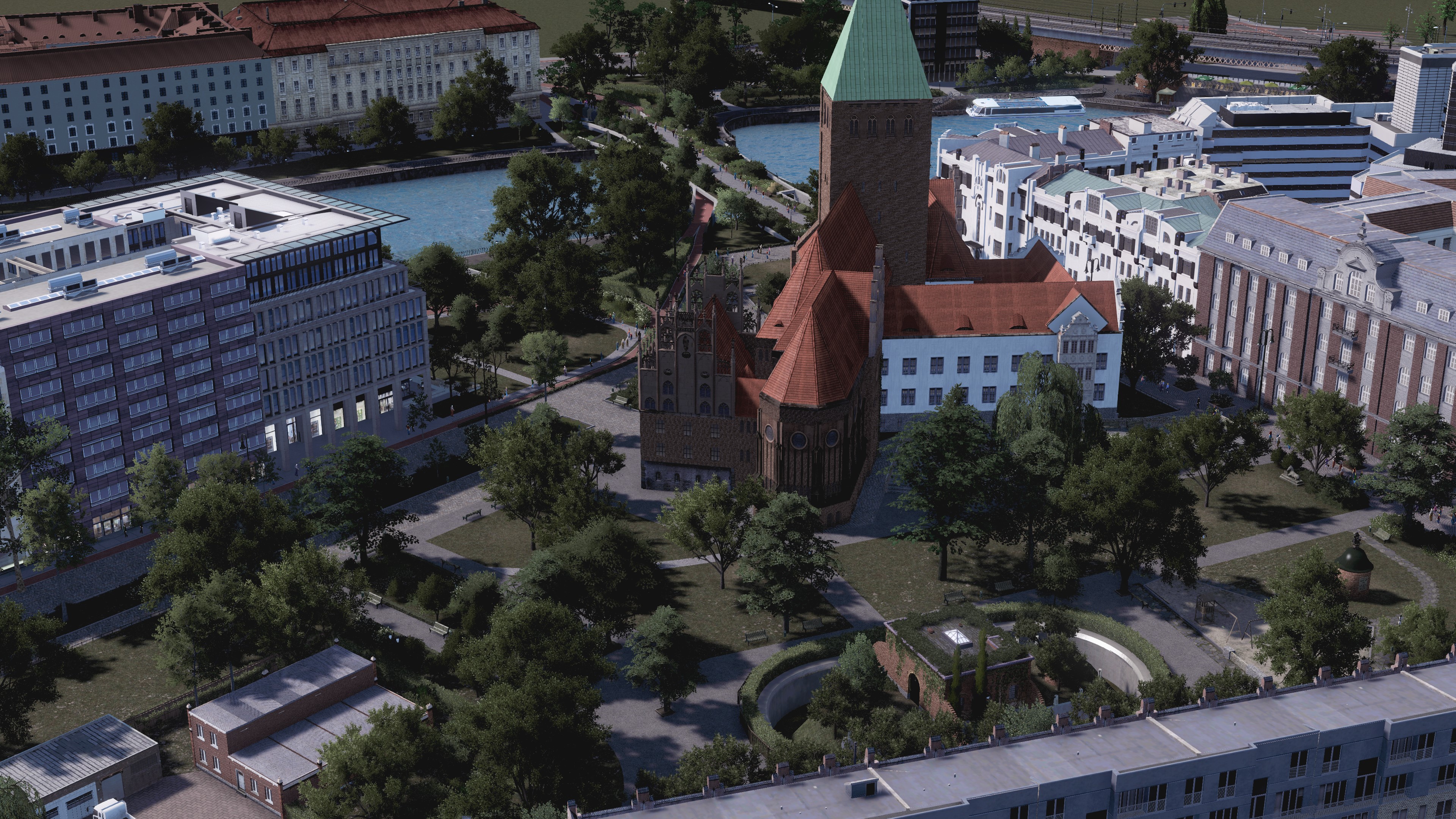 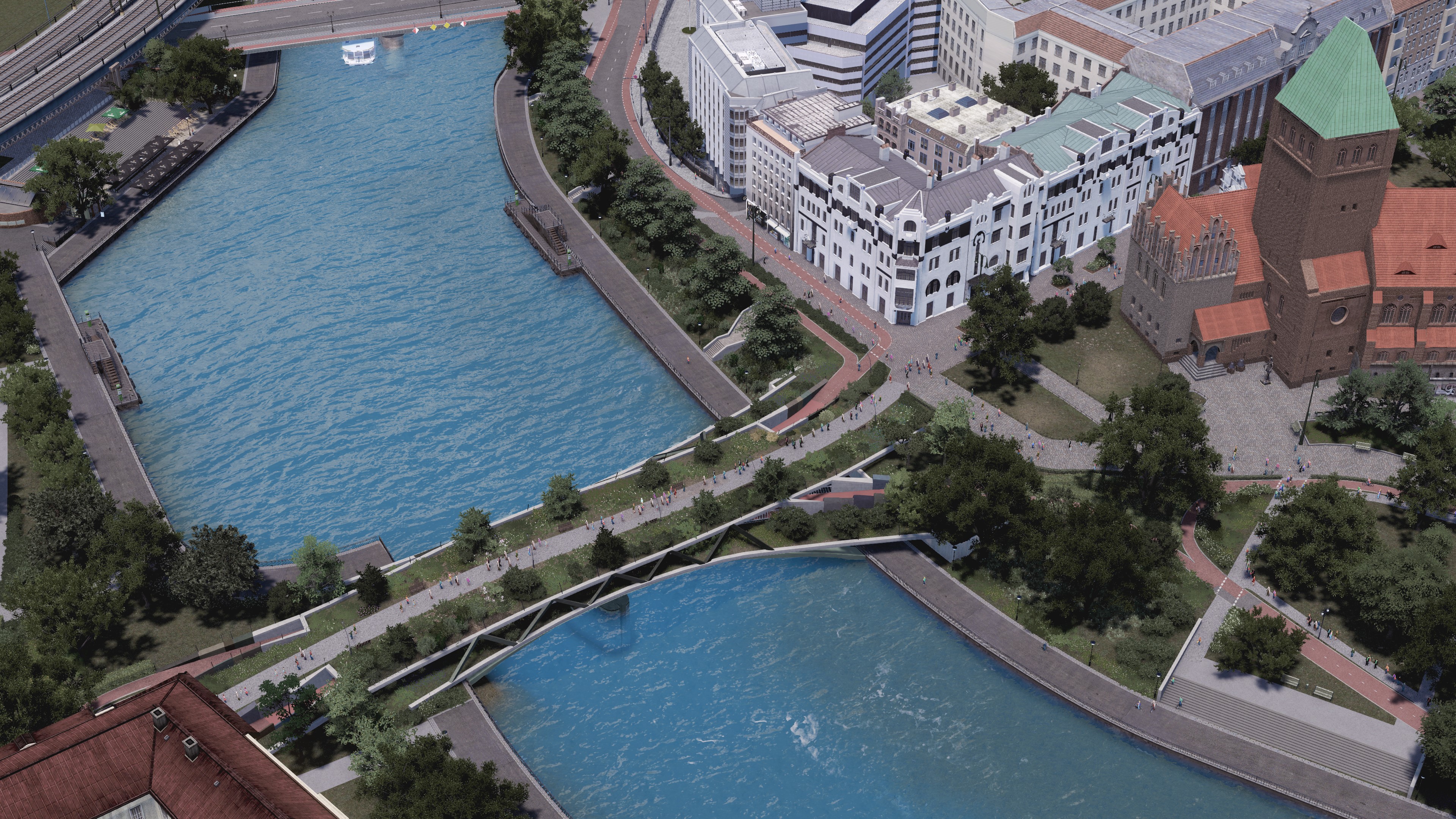 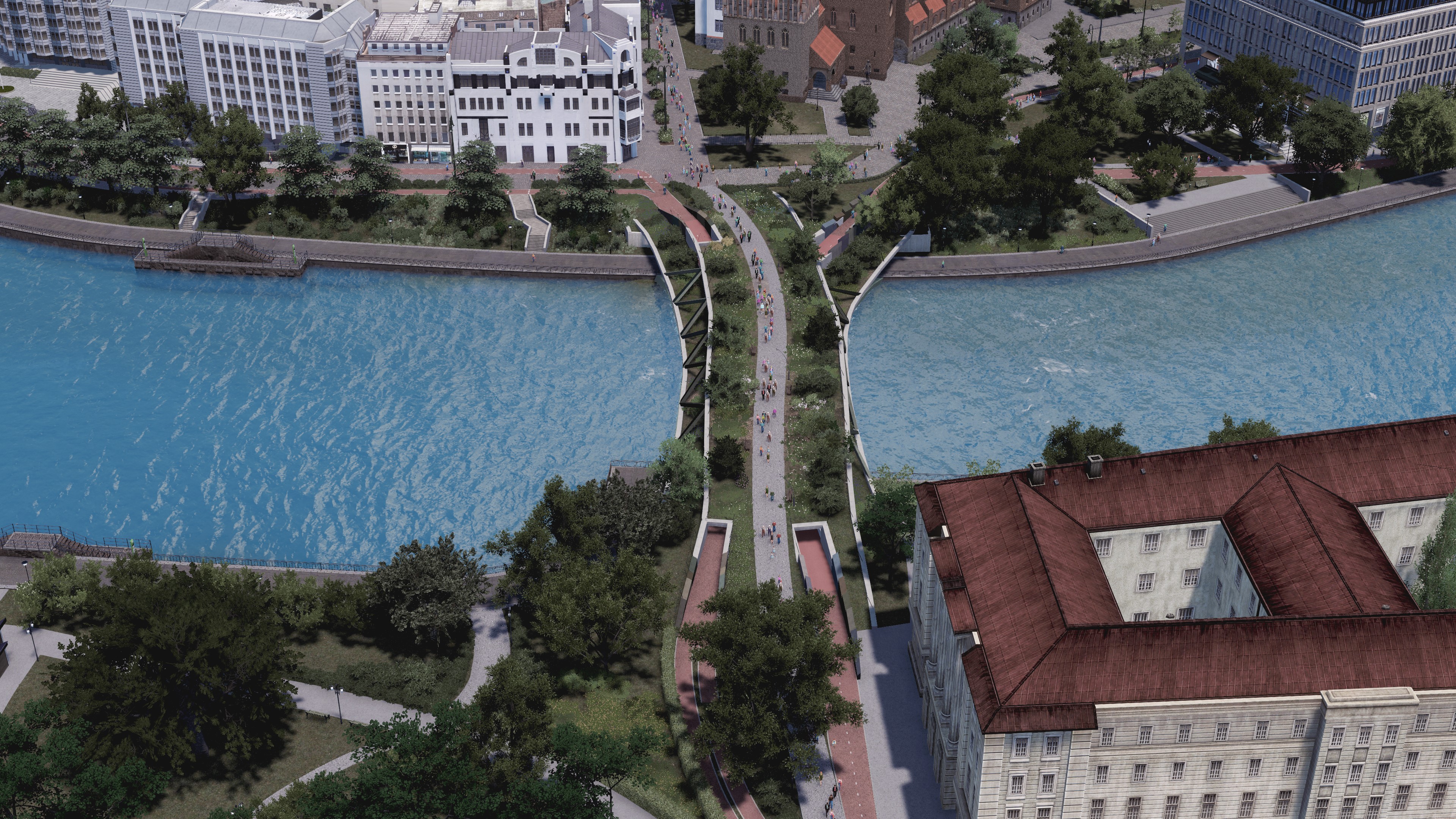 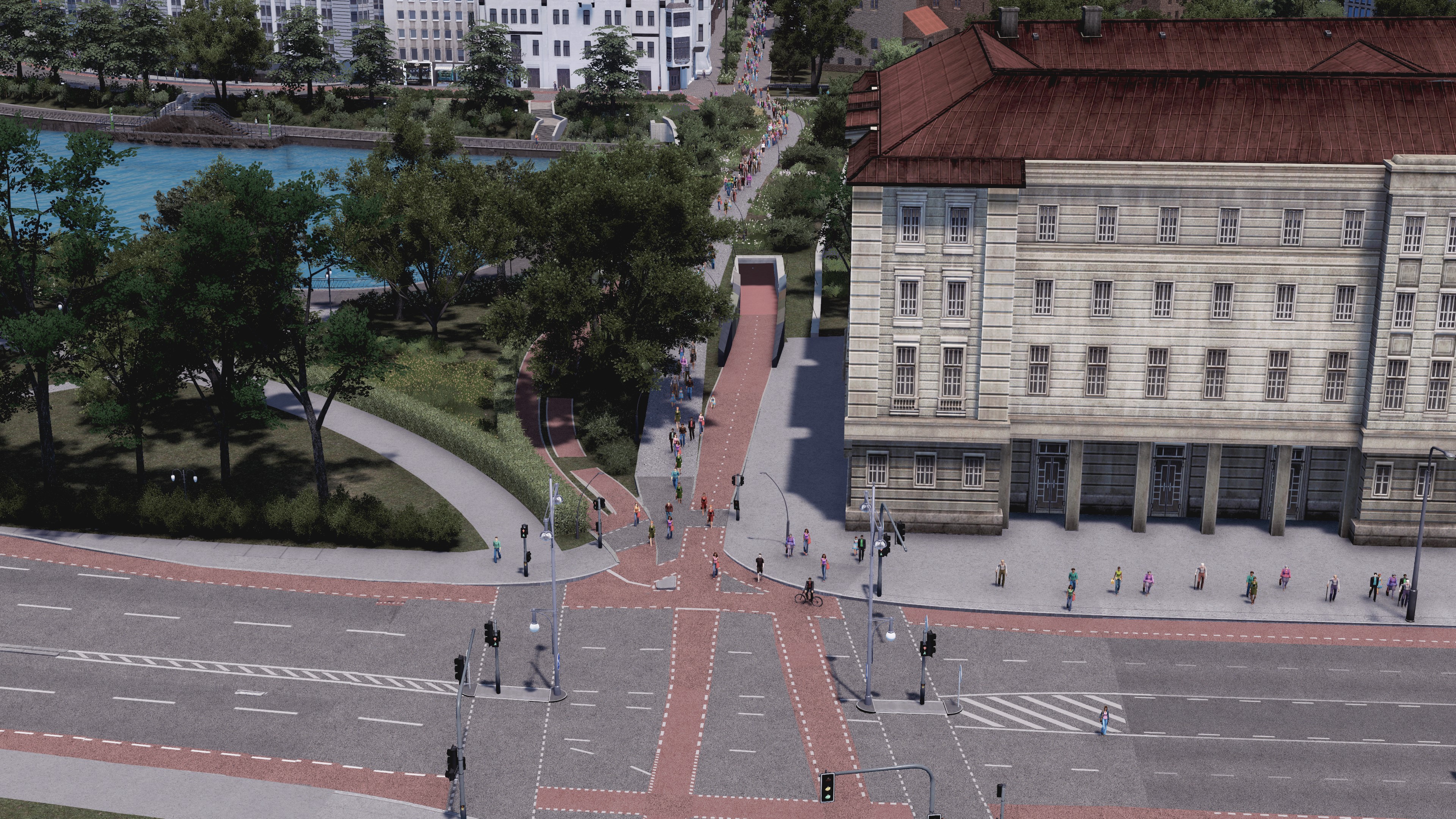 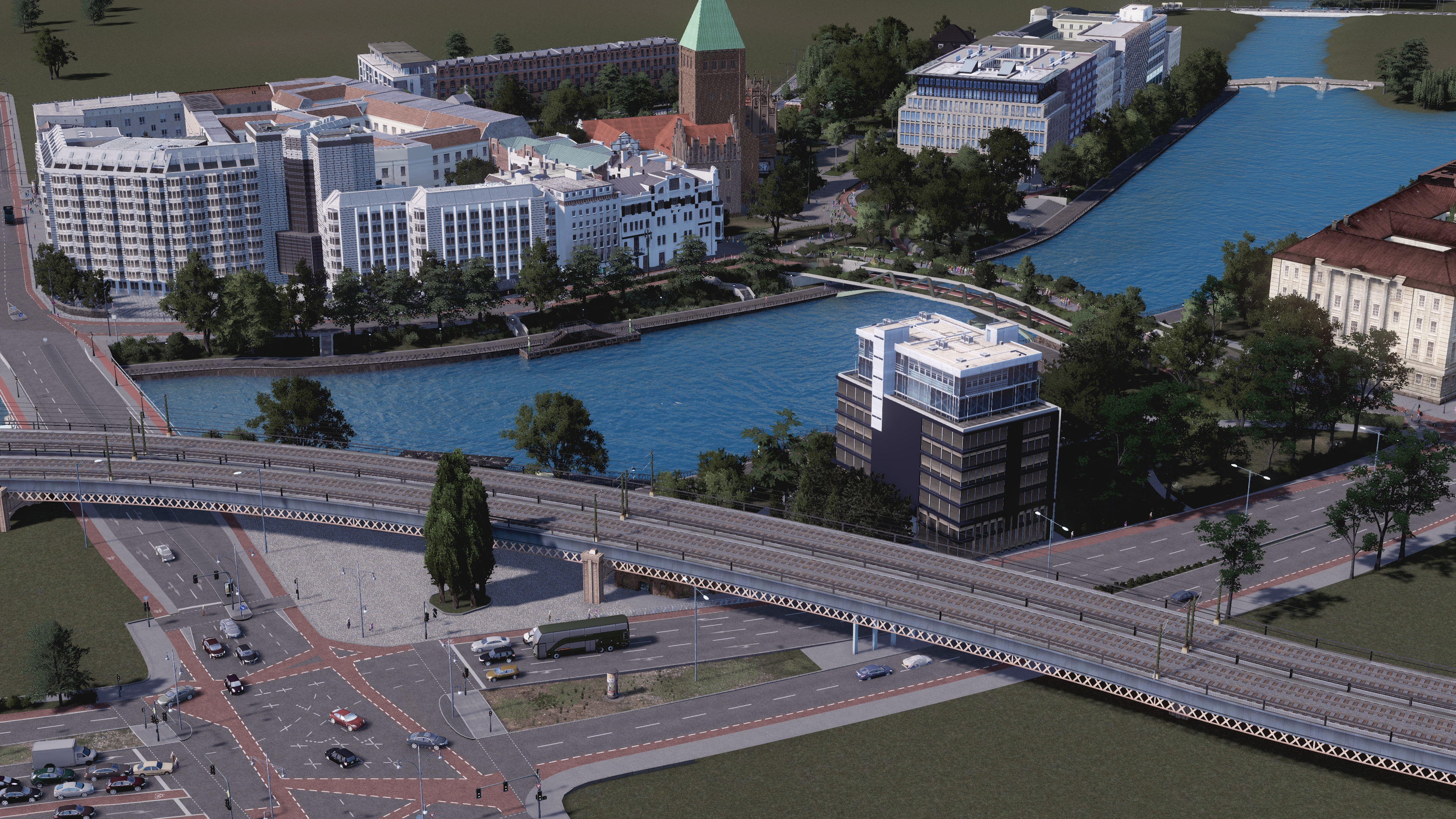 Did you get to watch the winner's announcement stream? What was that experience like as we called off the winning builds? After you found out you won, did you shout the news to the world and everybody around you, or keep it to yourself?

I did indeed, and it was a thrilling experience for sure. It was so interesting to hear everyone’s thoughts on the builds. And as the stream went on and I got a better understanding of how the jury had been reasoning it really got my hopes up more and more as I felt my interpretation was in line with what the jury wanted. When the final announcement came it was a very special feeling and I was very happy of course.

Apart from some joyful spam in the youtube chat I shared it with my family and closest friends during the next few days. They were all impressed with all the competitor’s contributions and astonished that these things are possible to make within a game.

Part 2 of the live stream that took place on Youtube and Twitch on May 14th, 2021

Looking back on the Berlin Build-Off, what were your favorite things about the competition and do you have suggestions for how these kinds of events could be better?

Berlin is my favourite city to visit and I’ve been there several times. It was so much fun to be able to focus on an area that I have a real connection to and learn more deeply about the infrastructure, the history and the challenges there. And it felt really cool to be part of a process that hopefully will inspire some real changes in the future. The fact that this competition was linked to a real place, with real needs and local people involved really took this competition to a whole new level and was the most motivating thing to me.

The only improvement I could think of was perhaps having all the competitors on link during the livestream. I think it would have been interesting to hear every creator’s thoughts and process behind their build.

What's next for you in Cities: Skylines? What are you working on now and what plans do you have for future builds?

I’m currently working on my main project - the city of Sarougal. Or more correctly - the airport St Creile in the city of Sarougal. The airport has been a project that has taken almost 3 years and is now very near completion, and is (as far as I know) the most realistic/detailed airport of this scale ever built in Cities: Skylines. After that I will finally continue on the city itself. The city is in a Mediterranean setting, with a lot of inspiration from Italy and France. You can follow the process on my youtube, instagram, twitter and reddit. 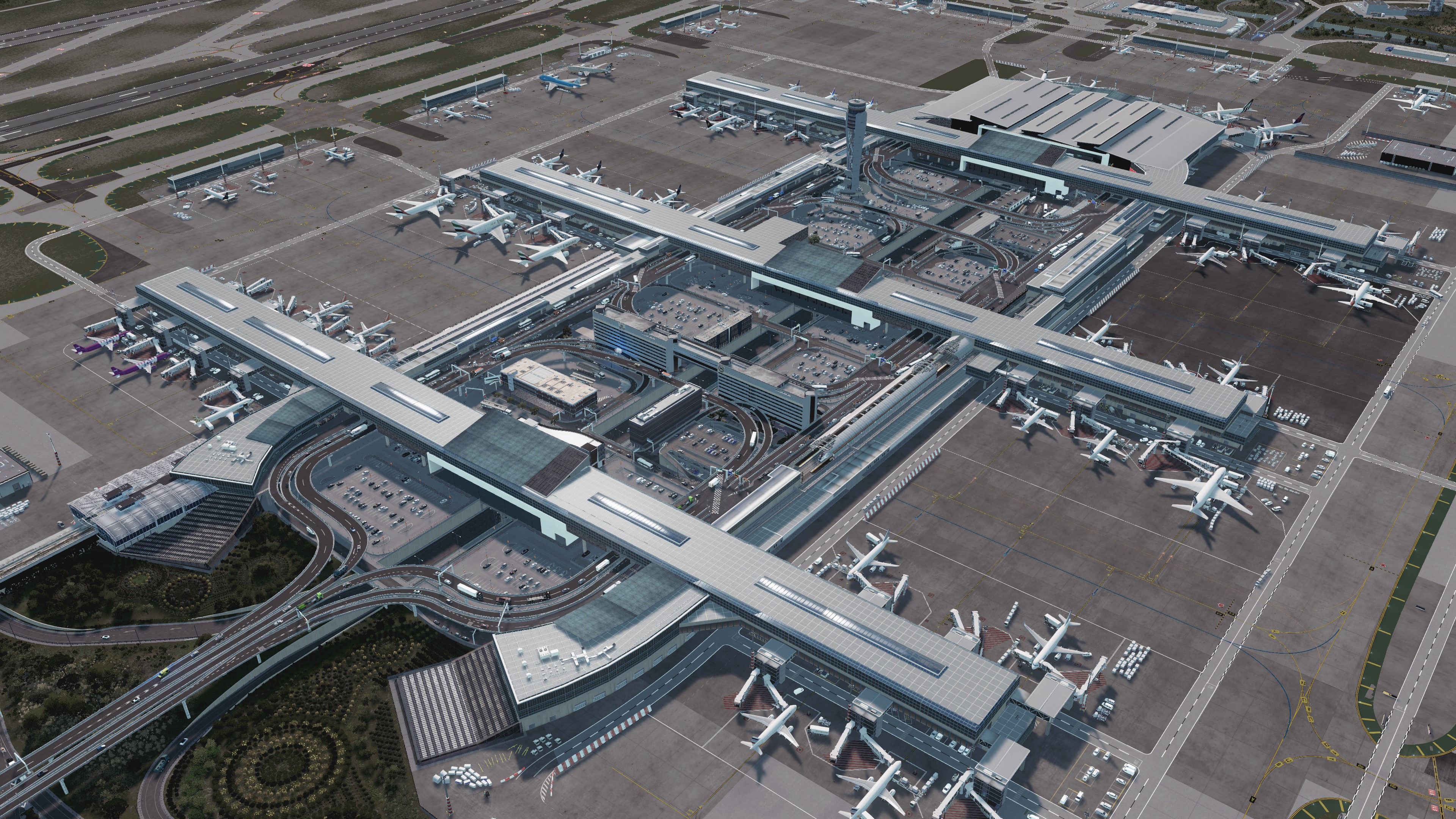 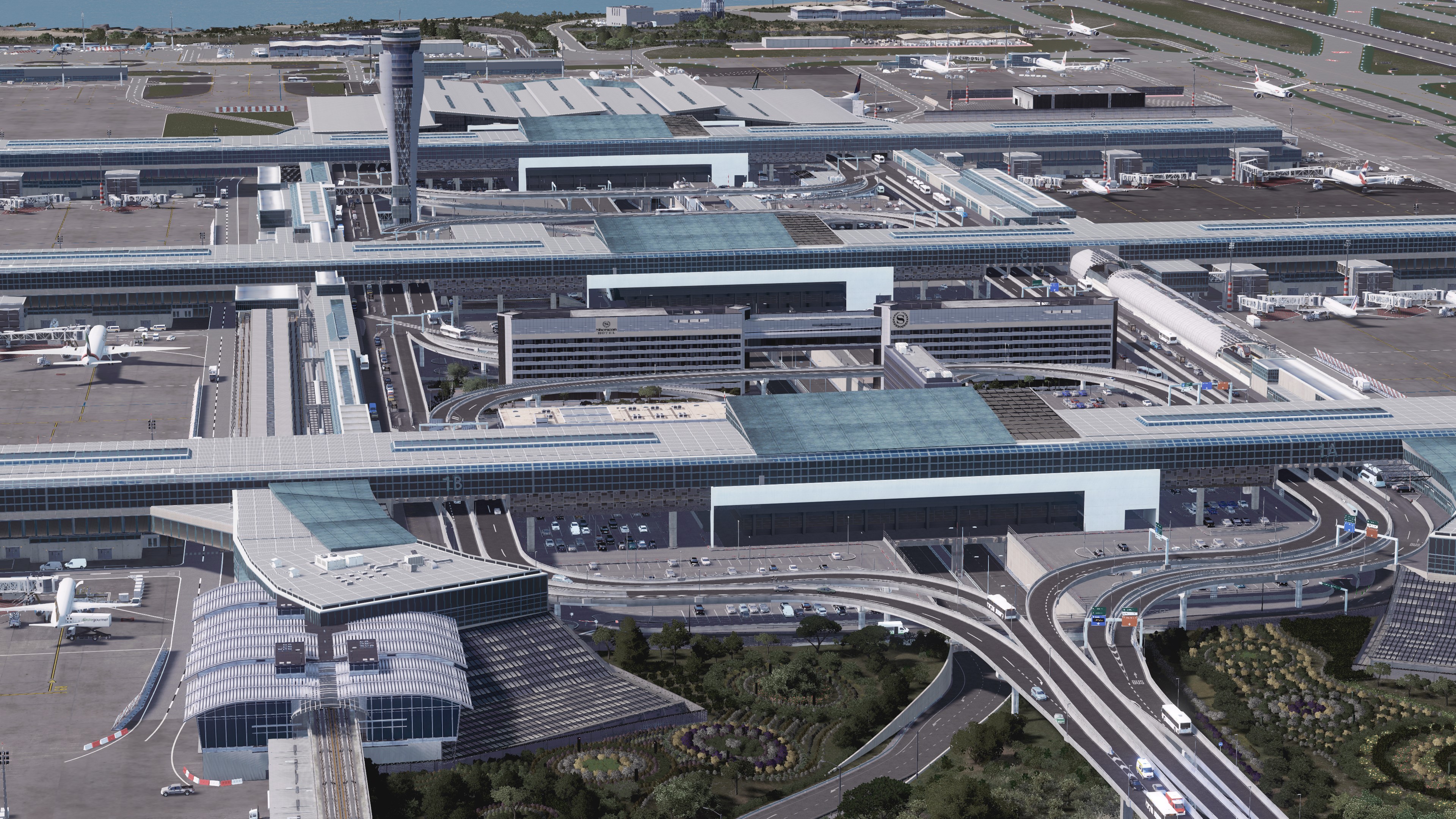 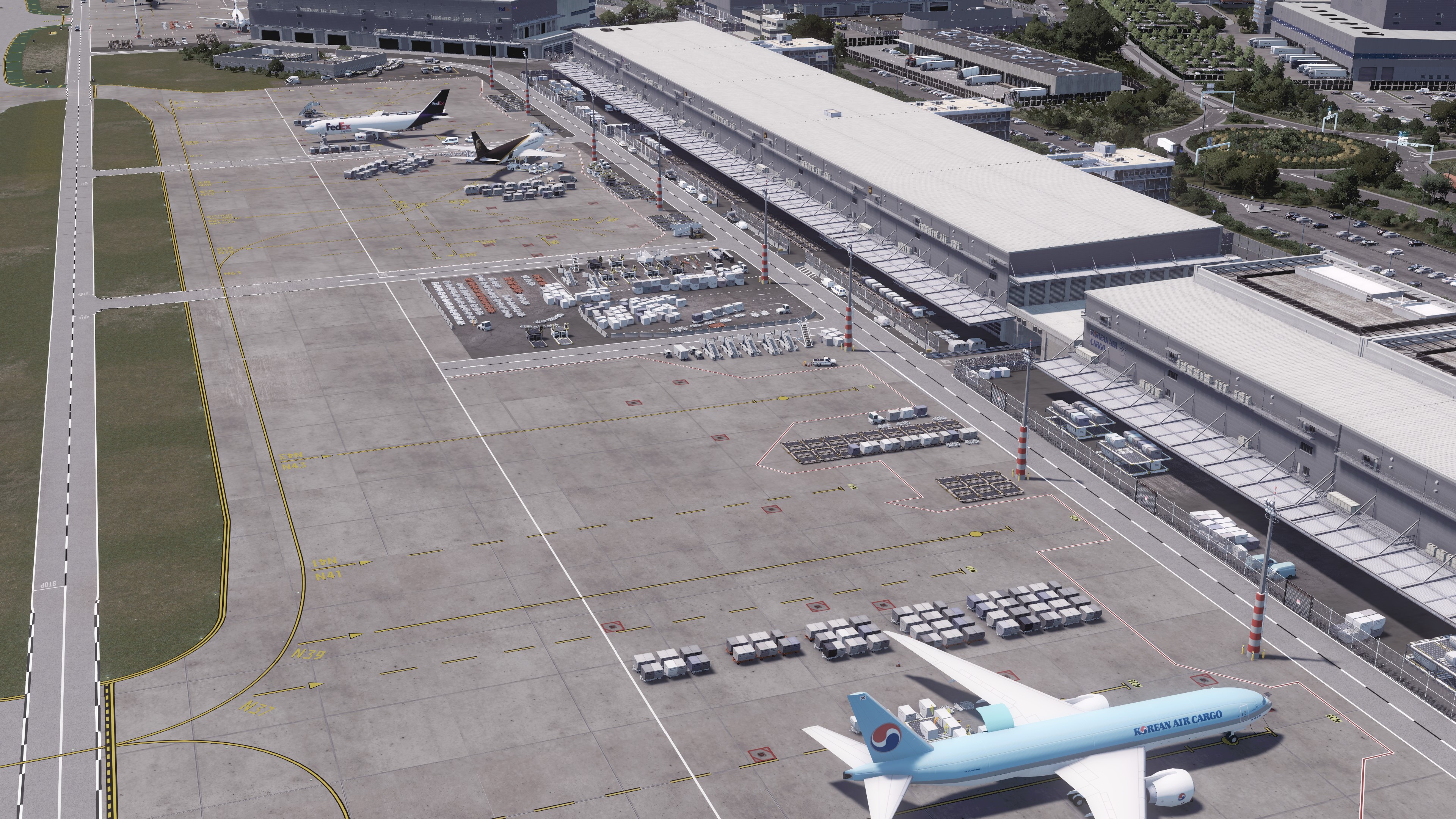 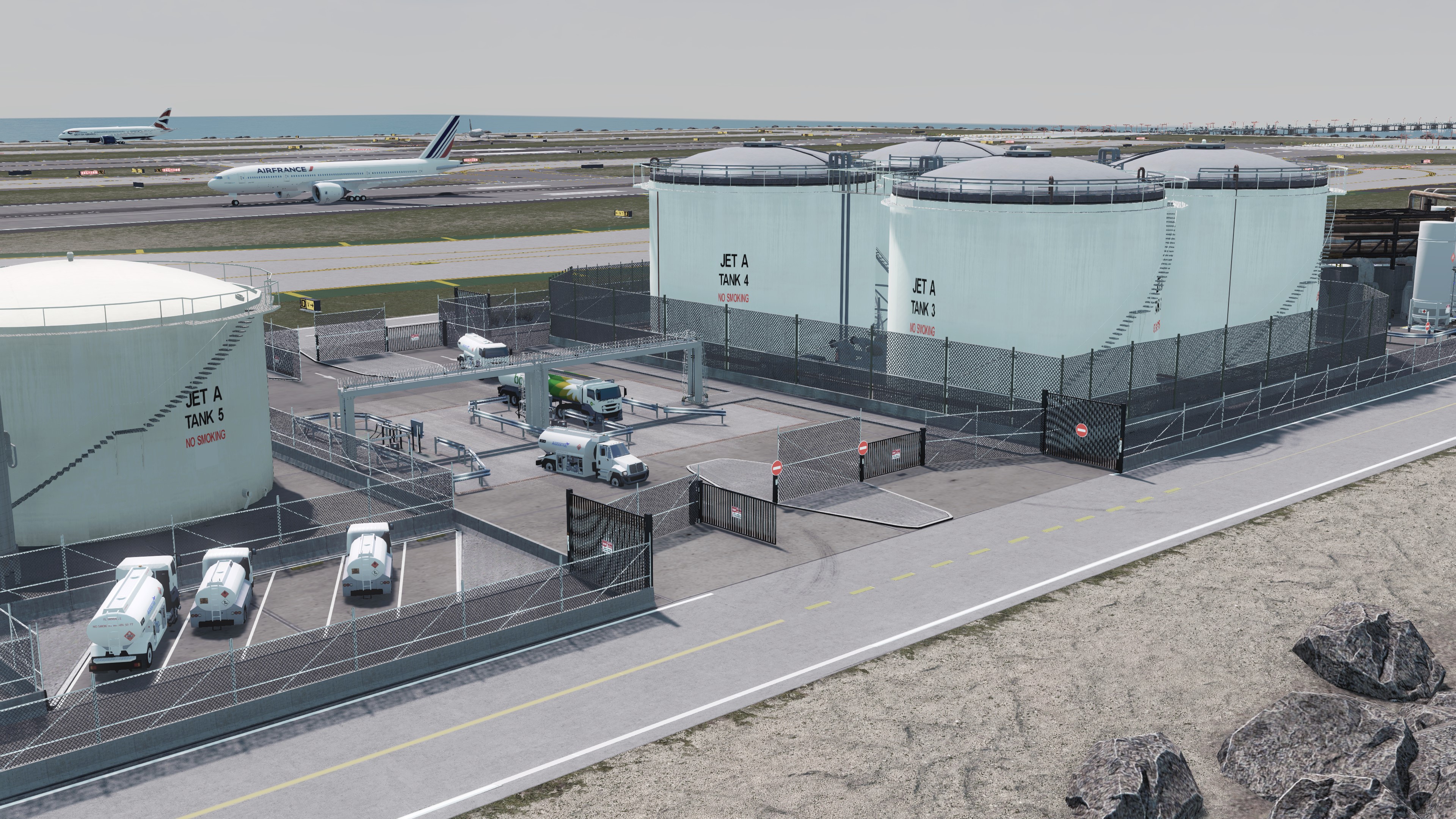 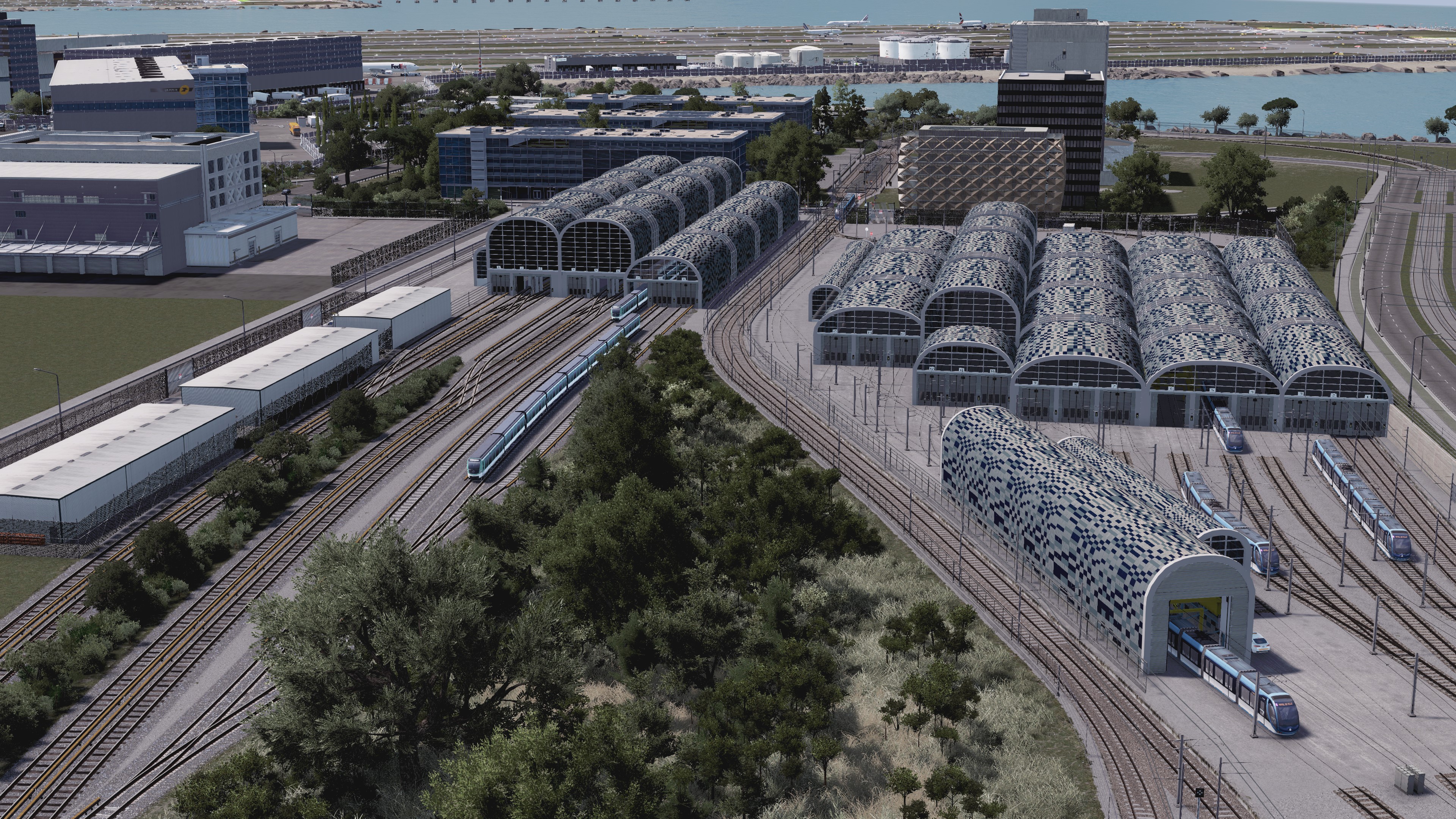 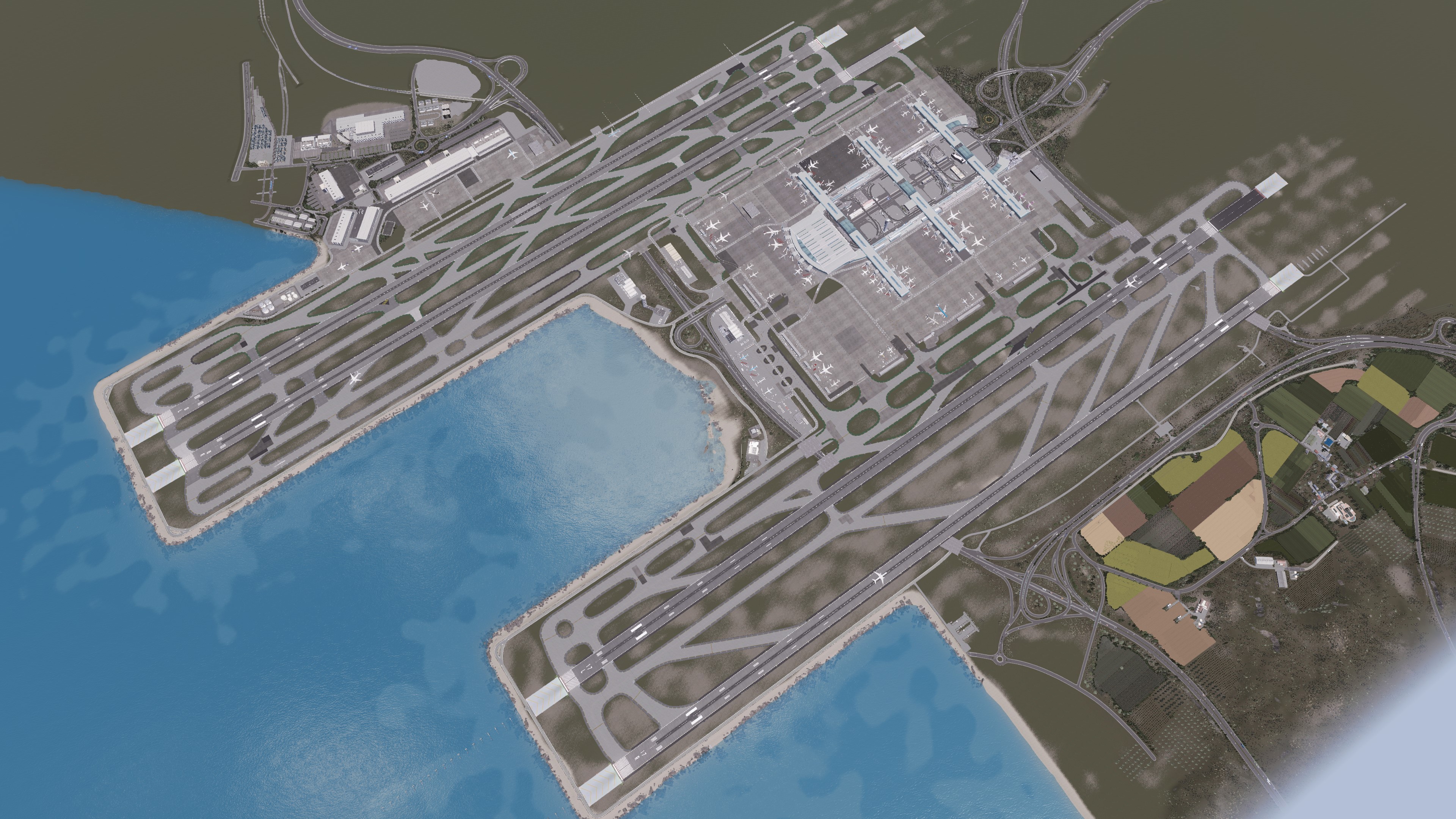 I've been following your progress on the airport, it looks incredible! Thanks for your contributions to this community and congratz again on your Build-Off win! Before we let you go, are there any shout-outs you'd like to give?

Yeah, I want to thank Simon for his incredible work on the Procedural Objects mod. I also want to thank Jens for releasing Berlin assets on the workshop during the competition, despite being a competitor himself. That really shows the spirit of the community and deserves a lot of respect.